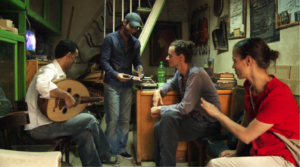 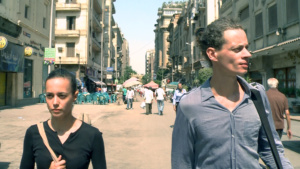 Combining dance footage with interviews and archival footage, the film questions the concept of tarab in depth and will provide a unique account of our creative process.

Before starting rehearsals for the creation of Tarab in 2013, we went on a creative residency in Cairo, in search of “tarab” – that sacred notion of Eastern culture. The revolution was rumbling in Tahir Square and Mubarak’s removal from power was imminent. It was in this context that we met Sandra Gysi and Ahmed Abdel Mohsen, two Swiss-Cairo directors.

Fascinated by our endeavour, somewhat amused by our temerity and stubbornness in pursuing tarab, while the concerns of Cairo’s people were at that time far removed from it, the two filmmakers decided to follow us through the streets of Cairo, as well as with some specialists in Arabic music.

After studying maqams, the specific quarter tones of Arabic music that enrich the interpretation of a musical work, they were both curious to know how we would transpose what we had discovered from the long Arabic musical tradition to contemporary dance.

Searching for Tarab - Official Trailer from donkeyshot filmproduction on Vimeo.