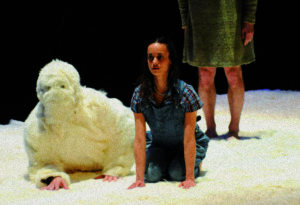 The project originated from the company’s desire to experiment and go beyond their field by venturing into musical composition and song. They wanted to distort, to become gauche and to maintain a form of innocence as the regenerative principle of creation. Here they follow the example of Henri Michaux, whose work as a painter filled in the inadequacies of poetic language : “It is because they have liberated me from words, those clinging partners, that my drawings soar upwards and are almost joyful. And so I see a new idiom in them that turns its back on the verbal and liberators”.*

However liberating, this desire to go beyond the boundaries of the original discipline is the starting point for a piece that reasserts the formal power of separation in its construction and the division from an absolute that appears to be lost. It is from this lucidity, tinged with nostalgia, that creation flows. Division is posited as an aesthetic principle opening the way to a questioning and to play.
It starts with folk music, an original composition for guitar and voice performed live by  Nicolas Cantillon and sung by him in a kind of gibberish, committed as he is to keeping a good distance from the likes of a “singer with a message”. Buttoned up tight in his sixties costume, Nicolas Cantillon is the mediator with another world, a kind of Lynchian go-between. He is akin to a shaman whose chants summon ghosts and returning spirits. He is outside, in the half-light, stranded on a shore in the night, facing the mental space represented by the white rectangle of the carpet on which three creatures frolic. The white carpet seems to float over the abyss ; it is a blank page on which a story can unfold, an “ordinary place” surrounded by a void.

In this setting, the function of the shaman-musician is to open a window onto a beyond, while remaining within the space of the counterstory, which is also that of the audience.

The scene is a product of the forces that come together there. Laurence Yadi, a childlike figure in a check shirt and “working-class” dungarees, Régis Marduel in a white bear costume, and Alexandre Joly wearing a homespun dress with her head covered in peacock feathers play three hieroglyphs, three intermediary creatures, three monstrous representatives of a forgotten territory. Such is the psychological power of the costume, which achieves a kind of return to the origins, as dreams do. Each in his or her way is the wearer of a mask that can be felt to cover an absence. Images, pure images. They play at criss crossing one another ; they express emotions and affects ; they whisper secrets ; they turn like dolls in a musical box, turning as the turntable at the shaman-musician’s feet also turns, in a desire for circularity in unison, together and separately, like the stars in a galaxy. Reduced to the expression of a circle that is endlessly renewed and charged with animal energy, this turntable evokes a rite of communication, a point of intersection between the whiteness and the shadows, here and elsewhere, the human and the non-human, the other and the self, the other in oneself.
On the carpet, the movements, with much crawling and walking, are dominated by contact dancing. The characters form a trio with variable alignment, at the heart of which is Laurence Yadi. Centre of attention and instigator of the movements, she is the focal point through which the figures are made and unmade in subtle combinations that reveal an impossible symmetry and a programmed dispersion.
Elsewhere, in the distance, come echoes of a parallel life : a barking dog, the sound of a hunting horn, a chant that evokes the sound of crickets; parallel worlds, soon to be closed by the will of the shaman-musician, plunging the stage into darkness and the retinal persistence of an inhabited abyss.
The piece seeks to delimit the contours of the planes that it juxtaposes ; it does not indulge in trickery and it does not seek to offer consolation. While it distils a primitive, pre-reflexive atmosphere, bathing the spectator in a state of dream-like consciousness, it also speaks of another world, indeed withdrawn, but still bound up with this world. Laï laï laï laï plays on separation and otherness ; without abolishing them, it reassembles space to bring forth unity.