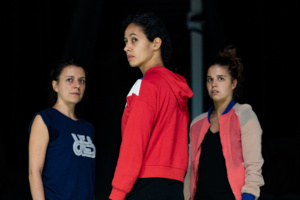 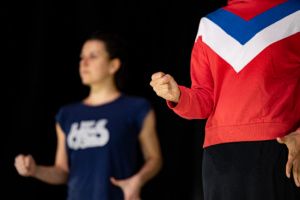 Three is the number of dancers you will discover on stage, three women who began this story in 2016, during a first version of the play.

During the creative phase, they passed like shooting stars, draped in shimmering costumes. Four years later, they deliver a refined version of extreme intensity in which they appear to confront an enemy that haunts the emptiness of the stage and on which they convey the strengths and weaknesses that drive them.

3. is not an army, and yet these three women carry within them a whole arsenal that enshrouds us and rallies us to their cause. The exercise is fascinating with its radical form and pure gesture.

With this piece the choreographers aimed to present the portrait of three women for whom dance is a weapon of resistance and a means of emancipation. For the soundtrack they asked Egyptian composer Maurice Louca to adapt his famous album Salute the Parrot (Nawa Recordings, 2014) whose powerful sound, in turns hypnotic and almost pounding, inspired this creation.