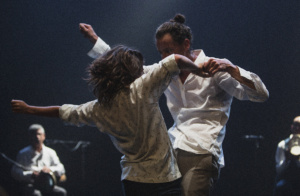 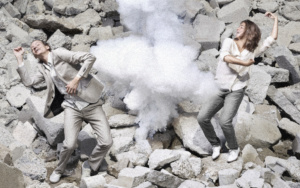 It is 1995, Laurence Yadi and Nicolas Cantillon are in Beirut, Lebanon. There begins a story that will lead them to a world of creation tainted by the unique atmosphere of what they consider being their first true meeting.

The same year, Mohamed Matar (Arabic buzuq master) dies prematurely in Beirut, aged 56. Laurence and Nicolas never met Mohamed Matar but he will play a central role in this creation.

Beirut 1995 is an attempt to reenact the moment of birth of their multi-styles FuittFuitt under the guise of a fairy tale.

December 7th 1995. It is 9pm. Laurence and Nicolas are on tour with a dance company called Le Ballet Jazz Art de Paris. The show is over; they are on their way from the Beirut Theatre to an evening specially organized for the company in an up-market restaurant of the capital. The twelve dancers together with the rest of the team arrive at the restaurant to join a table of intellectuals, journalists, writers, poets and TV presenters eagerly waiting to meet the Parisian troupe.

It is 1995. The mezzés are flowing and there is a feast-like atmosphere. The Lebanese civil war has come to a close. The city has regained its status as a tourist, commercial, cultural and intellectual centre of the Middle East. The guests are enjoying Lebanese pop music and are partying like there is no tomorrow. Everything that matters is happening here and now.

Laurence starts to dance with one of her colleagues and a TV personality, sweating and undulating in a collective euphoria. The evening is at its climax.On the same evening, Mohamed Matar passes away. Moving as if her body is as solid and fragile as an undulating rope, Laurence seems to be driven by an endless motive of torsions and isolations. Did Mohamed Matar transmit his maqâm to her? Meanwhile, Nicolas is sat struggling at a table attempting to work out whether he has drunk too much arak, whether his polish roots have let him down or if he cannot handle 50 per cent alcohol anymore. Or maybe it is Laurence, who he has been flirting with for a few days, that is slowly casting a spell over him through her alluring dance.

All this has happened.

Since then, Laurence Yadi and Nicolas Cantillon have created a dance style that invites the body to continuously and endlessly unravel, which is similar in process to how the maqâm works: playing around the restrictions of the occidental tonal system. This is what defines their multi-styles FuittFuitt.

With Beirut 1995, the choreographers aim to stage a specific moment; a moment that they hold on to and stretch in order to keep it alive. Which is perhaps what they have attempted to do since the very beginning of their careers as dancers and choreographers. In order to do it, they invite two musicians on stage for the project : Adel Degaichia and Ammar Toumi, both maqâm specialists and trained in Arabic classical music. The format of the piece is a concert in which Arabic traditional music will be played live alongside a dance that is the natural projection of it.