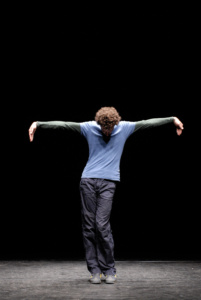 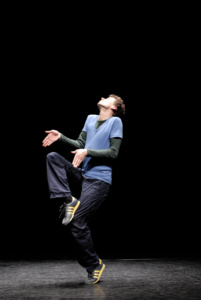 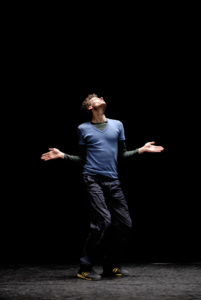 A character dances on stage. The dance is like a natural secretion, organic and elaborated at the same time. The company breaks here with its “deconstructed” manner and seems to have decided to produce an identifiable dance, reassuring and predictable. Impression contradicted by the presence, behind the dancer, of a curtain cutting the stage in two that rises in the middle of the show revealing the monumental letters of the word “climax”, designed according to the model of the nightclubs disco balls. The solemn and ridiculous apparition of this word overhanging the stage, inaccurate title, inaccurate programme, inaccurate definition, doesn’t disrupt at all the dance that continues on the same mode while the play enters the heart of the matter and elaborate its meaning on this improper, inappropriate word.

The climax with triumphant sonorities is doomed to melancholy, bearing the germ of its own death. It draws a horizon, an summit that always gives way : salutary disappointment because the dance would not resist meeting its desire. Its a lure, a provocation to which the dancer opposes an imperturbable concentration.

In this gap between the dance and its climax, between the danceable and the naïve temptation of an absolute, is spreading the theatrical space inhabited by a dancer, apparently indifferent, however animated, turned on by the influence of the climax that gives a motive, a reason to continue. Such is its virtue : generating energy, tracer of perspectives, the climax is similar to the project, the artistic intention, in bloom in a minimal flowering, frustrating and precious.

Once more, the disruptive logic that underlies every shows of the company is at work. The critical irony, constant of their choreographies, is itself eluded, thus avoiding the reef of a binary discourse in favour of a third way that spreads from everywhere, recycle everything that could prevent creation and free some space. To dance.