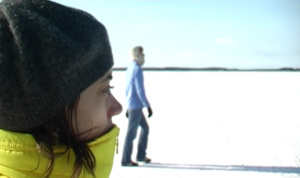 In the isolation of the Finnish winter landscape, contact is established between two people whose attempts at interaction, at communication, end up reflecting this very isolation, the impossibility of breaking, despite their intimacy, the barriers which maintain the inevitable mutual inaccessibility which separates us from the Other.  The snow which erases all possible division between earth, sea, and sky, landscape turned in upon itself, imposing introspection.  It is the mirror and the wall of a series of random thoughts, of a vast panoply of mental images, somewhere between peace and madness.

Each scene, like so many fragments of a story, simple proposition, is contained by a set duration, limited by a fixed term (“durée déterminée”), stripped of that which has motivated it (the cause) and also of its consequences (the effect).  It is the beginning of a story that is scattered by uncertainty and put on hold, and this uncertainty becomes the storyline itself, inherent in the intemporality of the Finnish landscape.