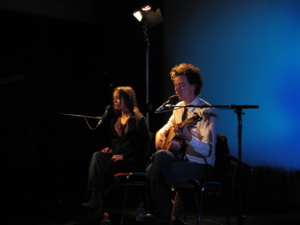 We are interested in that which we don’t understand. We have always tried to divert meaning such that it stays open, perpetually remaining a theoretical worksite.

Our new work addresses music, more precisely folk music, the sort that has a historical dimension which is political in what it asserts, social in its gatherings and aesthetic in its performance. The fourth point we want to address is its nonchalant appearance, and this point interests us the most; a folk song can transmit a violent message by means of a luminous harmony.

We would like to share with an audience a concert performance of songs sung incoherently. The lyrics, devoid of meaning, will mime the sound English. Some key recognizable words will suggest a possible story.

By working with the medium of a concert we aim to elaborate a different choreographic aesthetic. Our intention is also to use the body to make images that could have come out of an abstract folk story.