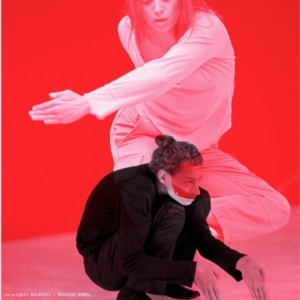 Curated by Château Rouge – Annemasse and La Comédie de Genève, F-Lex is a cross-border festival taking place in the four corners of the new railway network. Its aim? To celebrate the Léman Express, this new train, which widens the territory while reducing its distances during a cultural, festive and general public festival.

Compagnie 7273 responded to the programmers’ call. Applying their motto to the letter, the choreographers decided to work on the form of a large parade, in the spirit of a carnival.

The workshops begin after a presentation of the project to amateurs spread over three communes (Annemasse, Bonneville and Geneva) in autumn 2019. Their aim is to transmit the dance style specific to Compagnie 7273, the Multi styles FuittFuitt. Everyone then sets off to discover their own body and experiment the continuous movement linking the joints together in an uninterrupted, undulating and joyful flow.

This intimate experience is enriched by the more theoretical discovery of the origin and evolution of the dance style itself. Laurence Yadi and Nicolas Cantillon invented the Multi styles FuittFuitt a long time ago in India, then developed it in the United States to broaden its spectrum in Paris, and today in Annemasse and Geneva.

This long-term project (six sessions of workshops spread over three territories, between autumn 2019 and spring 2020), with amateurs of all ages and backgrounds, finds its culmination during the F-LEX Festival in the form of a large, joyful and hard-hitting farandole that crosses cultures and the history of a dance, mixing people and connecting places.