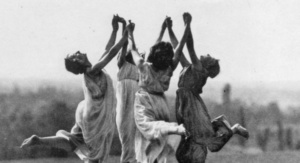 Compagnie 7273 has been commissioned by the town of Annemasse to carry out a cultural mediation project with the inhabitants of the Perrier district. The choreographers proposed to collaborate with La Marmite, a cultural, artistic and citizen action project with which they have already worked in 2016-2017.

Laurence Yadi and Nicolas Cantillon are accompanying the Monte Verità group this season. How to rebuild community ? How can we strengthen ourselves ? How can we find hope and the power to act? These are some of the questions that the Monte Verità group (named after the Ticino hill that has welcomed many communities with artistic, socialist or moral ideals over the years) will ask itself during a dozen of visits, outings and workshops.

The group composed of inhabitants of the Perrier district in Annemasse will complete its journey by crystallizing the evolution of its representations and feelings in a form produced in dialogue with the choreographers. The realised form (photography, writing, plastic work, dance, film, etc.) will be exhibited in a partner venue and/or on La Marmite website.