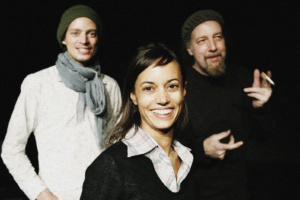 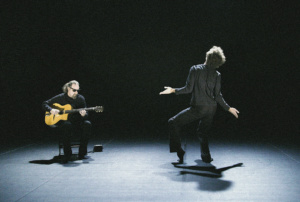 In 2006, Laurence Yadi and Nicolas Cantillon composed the score of Climax, a 40 minutes solo piece danced by Nicolas Cantillon, without interruption and in silence. The writing condenses the movement in the centre of the stage and adopts the constraint of never repeating the same figures. Developed around a succession of emblematic images taken from the history of dance, sport or politics, the piece blurs the identification of these references and perturbs the definition of the Climax.

In 2007, they discovered the world of the guitarist Sir Richard Bishop, a discovery that opens onto a re-reading of Climax. This music seems to them to be able to take the place of the silence that envelops Climax, thus modifying the perception of the piece and shifting the focus thanks to the presence of the musician on the stage.

The experimental approach of Sir Richard Bishop, the virtuosity of his playing, as well as his sobriety mingled with humour, allow a closeness with Compagnie 7273 that is now renewed and updated with this new version of Climax.

Unravelling its natural logic, the piece endlessly reinvents itself through numerous artistic encounters and residencies. It has been played with the Berlin experimental guitarist Steffen Basho-Junghans, the Mozambican bass player Nelton Miranda, the Muscovite saz player Roman Vselenskiy and with the Italian musician Jacques Mantica and his legendary electric guitar. Listen & Watch was also recreated during a residency in Cairo with well-renowned oud player Sam Shalabi. In 2015, a 40 male singers choir joined Nicolas Cantillon on stage. Recently, the piece started its new metamorphosis in collaboration with the Geneva Camerata chamber orchestra. Other versions are to be written still, following along with wishes and propositions.