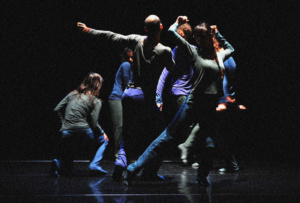 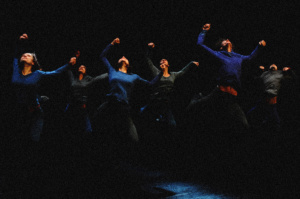 Fog and silence. Dawn and waiting.

Gradually an apparition and one can distinguish a body levitating in space, in a spiral movement, with its origins lost in the inaugural vapors.

One after another, five bodies join the first, executing and repeating like a canon the same movements. Four female and two male dancers are dressed almost identically in trousers and T-shirts one over the other: corresponding to the curved geometric forms and the perpetual movement, there is a symbolism of colors, with the blue, intermingled in delicate and warm shades.

They move in a multi-polar space which impregnates them completely and which embraces independent directions, necessary and endless, producing a contrasting feeling of abundance and deficiency. Like being in the distance, feeling alone and together at the same time, they seem to be suspended in cosmos, as if their weightlessness defies heavenly laws or as if they are surfing on the peak of a flexing wave.

The structure of the movement alternates between the concave and convex, the curves and the straight lines, the rising and the falling, the continuing movements and the motionless stasis. It may trigger one to think about the rhythmic contraction of a heart, systolic and diastolic, or at the slow and regular rate of the pulse.

But this is in an effort to bring in something different from the repetitive movement, which always returns to the same place. By incorporating the game of interaction between bodies and the variations of perspective, through the lapse of time, transformations are operating, sensations emerging, and situations created. The attention is drawn to smallest details of movement. There is no border between inside and outside, between the invisible and the sensible. Through its organic quality, the movement witnesses the transference of energy, which acquires its source under the skin’s surface, in order to elevate it and propagate it to the extremities.

The twisting of the joints at the wrist allows the renewal and rhythm of the cadence. The curves of the spine and the hips, and the oscillations depict an ornamental dimension of this style, which recreates the arabesque, its asymmetries, and its perpetual capacity to bend and meander in many forms.

The music by Sir Richard Bishop accentuates the special aura of these movements.

Dance and music unite and converse, allowing the acoustic dimension to fill the space. The rippling succession of figures echoes the variations of the same musical theme. The music itself guarantees a dramatic function building up its intensities until the finale: the space between each note reflects the gossamer-like embroidery which electrify to some dissonant form towards the end. The space shrinks and confines the movement creating a rhythmic trance in a concentric circle. The bodies fuse under the influence of a fatal attraction. The light exposes the trance-like bodies, subjected to boundless acceleration. The scene suggests unfathomable depths, a black hole which would inhale and absorb the bodies. A strange end of double relaxation occurs where the dance seems to get engulfed by its own phantasm which is also its highest degree of incandescence. On the brink of merging with its unlimited desire, the dance surpasses it own abilities in a kind of voluptuous gluttony, which attests to its own weakness and accomplishment. In the night characterized by the final note of a guitar chord, there remains the dream of an ecstatic fusion of pure movement.