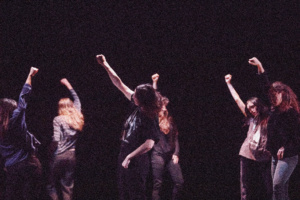 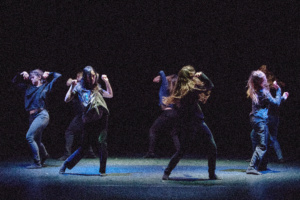 Seven women, a circle and a deep dive. NUIT is a search for ecstasy.

Seven dancers play with their presence on stage and create an intimate score between them. These women communicate together around a common choreographic score, a dance that seems to have been impregnated in their bodies since the beginning of their lives, as if they had met each other since la nuit des temps to share a ritual that belongs to them. They display a distance between them that gives the event a mystical form borrowed from the oldest ancestral traditions. It is at night that this community of individuals is transformed into an organic society. The dancers are linked by a physical solidarity, because each one needs the others, like the organs in a body.

The symbolism of the circle is used, which alone refers to the mysticism and mathematics of the universe. The interest of this choice is to propose a path that conceptualizes the space of a group of individuals through a form that pushes them to confront the phenomenon of the past, present and future. The circle forms a perfect geometric shape. It has neither beginning nor end, making it the symbol of continuity, eternity and infinity. The circle is also a representation of uniqueness and what is close to us, as symbolized by the different social alliances such as the family sphere. More broadly, the gathering of a group of people around a common goal is also called a « circle ». The idea of the circle finally includes the mystical and the religious. Here we think particularly of Sufism and shamanic ceremonies, whose search for ecstasy through an intimate experience is in line with our own reflections.

The light of the Zurich-based designer Ursula Degen gives the piece NUIT multiple entries as to the place in which the fascinating experience of the seven dancers takes place.

All this is carried away by the inescapable Egyptian composer Maurice Louca, who constructs for NUIT a percussive sound material, between chaâbi and experimental music.